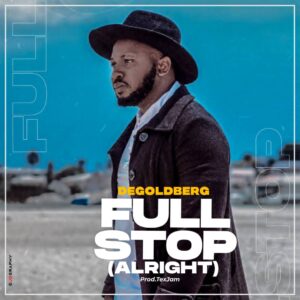 Biography:
Nyeche ‘De-Goldberg’ Enyinda is a Nigerian rapper, songwriter and record producer.
Born and raised in Port Harcourt, Nigeria, he started singing as a teenager in the choir of his local church where he developed interest in drums and piano.
The incident of his sister’s sudden demise in 2005 would go on to change his life  as he was said to have been very fond of her, and would be found in isolation for long periods listening to Twista’s hit song Hopeful featuring Faith Evans. A song he would admit influenced his decision as a rapper.
He went on to write his first song five years later in collage titled Happy Memories produced by childhood friend, SDK.
De-Goldberg’s rap technique has been described as phenomenal by many hip-hop connoisseurs as it portrays incredible storytelling dexterity.
Equipped with flows of fascinating speed, coherence, lyrical depth, cadence, amazing versatility and undeniable passion, he has been referred to as a whirlwind of newness to the CHH rap game by many.
His seamless delivery of scriptural and inspirational realities in such convincing, yet sumptuous platter is indeed a joy to behold

What do you think about this song?