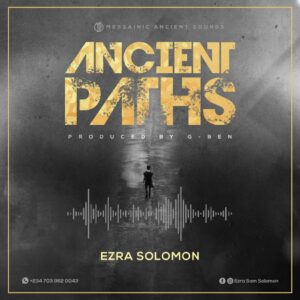 Ezra Solomon is a Messianic minstrel, an experient minister and a fervid lover of the Holyspirit who is acquainted with the spiritual pulsation of the heavenly realm and the hallowed beckon of the Divine Spirit.

From the staples of Messianic Ancient Sounds cascades his empyreal debut, “Ancient paths“. It is a celestial symphony borne on the matrix of spiritual intimacy and derived from a profound longing to be taught of the immortal Potentate, so as to walk in His path and flourish in His ways.

“Ancient paths” is not just a song, it is a “conveyor” sound to the deep locus in God, where men ingress into an insatiable hunger and thirst for the deep of God, to be molded in His path and to be conflagrated in the flames of his love. Gear up to journey with the Holyspirit as you give a listening to this sound of ascents and of ancients